Due to some technical difficulties, our stories this season have not been posting!  Here is a re-cap of the Swim/Dive team’s season thus far:

Dive team at the Centerville Invitational:  The men’s team took first place for the second year in a row!  With a large number of new divers to the team, this was a great experience for them to see some good competition!

Girls v. Rushville:  CHS beat Rushville 137-33.  1-2-3 sweeps occurred in Diving and the 500 freestyle.  Carley Templeton came in first in the 200 IM, Audra Volz and Ryleigh Loper went 1-2 in the 50 Free, both going 28s.  Maddie Powell had a nice swim in her 500 freestyle, and Jennifer Geise had a nice first high school dive competition, coming in second to Abbey Thoman.  Audra Volz and Carley Templeton went 1-2 in the 100 breast, and had better times than their starting times from last season.

Tri-Meet vs. Rushville and Batesville:  The girls beat Rushville again, and lost to Batesville by 11 points.  Many personal bests were posted.  Divers went 1 and 2 in their event, and in many of the races, CHS was just out-touched by Batesville by less than ½ a second.  This brings the girls season record to 2-1.  The boys start off their season with a 2-0 record and add to their undefeated streak 28 dual meets, the longest in school history.  More personal bests were posted.  Junior and team captain Zane Spurlock was just 2 seconds shy of breaking the school record in the 100 breast stroke, an event he did not swim very often in his freshman and sophomore seasons.

Hagerstown:  Another win for both teams.  The girls swam well and dropped time in many of their events.  The boys also dropped time.  A number of our new swimmers are beginning to see large drops in time, especially in the 50 and 100 freestyle!

Richmond:  Both teams win again in a close meet.  Swimmers on both teams continue to drop time!  Some of our new divers got to experience competition again tonight, both in diving and swimming.

Centerville:  This was our 2nd annual Pink Out meet, where both teams raised money for the Fayette County Cancer Society.  While there were some decent swims, it wasn’t enough to win the meet.  This is the first dual meet the boys have lost in over 30 dual meets.  The Connersville Spartans and Centerville Bulldogs raised over $3000 to donate to the Fayette County Cancer Society during our Pink-Out Meet.  Thank you to all those who bought a pink shirt and came to support the teams at the meet!

East Central Relays:  This meet is always a fun experience for the teams.  Darrell creates relays that are both fun for the athletes and give them opportunities to win the well-known East Central Relays t-shirts, which come with a first place finish in each event.  While our swimmers did their best, only one relay team was successful in earning the t-shirt.

CHS Invitational:  Our annual home invitational was filled with a lot of excitement this year!  During the diving portion Friday night, a part of the diving board broke, which delayed the start of warm-ups and eventually the meet.  This led to divers cutting some of their dives for the evening.  On Saturday, the weather just would not cooperate!  Many of the teams dropped from the meet, leaving only the home team, East Central, and Lawrenceburg to participate.  The positive end of this was the teams were able to add additional exhibition swimmers, so more athletes were involved in the meet.  In the end, the Spartans could not pull out the win, but solid 2nd place for both the girl’s and boy’s teams.

Mt. Vernon:  After winter break where the swimmers were put through some tough workouts, the teams traveled to Mt. Vernon for their first meet of 2017.  The girls swam well, with time drops in a number of events, and won the meet by 2 points.  The boys swam even better, dropping time in all events, however could not pull out the win.

Volunteering:  CHS Swim and Dive team have been active this fall/winter season within the community.  As a team we volunteered at Crosspoint Biker Church, helping box and serve Thanksgiving Dinner.  This process typically takes anywhere between 3-4 hours and was cut to less than half of that time due to all the extra volunteers.  The team was very excited to help out this cause.  The second volunteer opportunity was ringing the bell for the Salvation Army at two locations in town.  The teams worked in shifts ringing the bell, singing Christmas Carols, laughing and smiling, greeting customers, and help raise money.  Team members also volunteered individually at the Robert’s Park Halloween Party and the Christmas in the Park celebration. 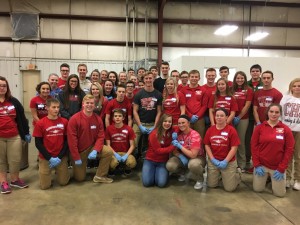